The Truth About Swimming Pigs in the Bahamas

Did you know there’s a pig island in the Bahamas?  Visiting the Exuma pigs aka the infamous Pigs Beach in the Bahamas was high on my bucket list.  I mean swimming pigs??  That’s pretty cool, right?

The Exuma swimming pigs are actually not on Exuma, but a more remote island called Big Major Cay.  Don’t worry though if you are staying in Nassau, there’s a tour to see the famous swimming pigs by power boat – Check the latest Prices.

And the TRUTH about Pig Island Bahamas?

Well, they actually do swim in the ocean and the tour from Exuma included so much more than just swimming with the pigs.

The Pigs Beach is uninhabited by people and accessible from Staniel Cay if you want to go there by yourself.  But since Staniel Cay was a bit too remote for us with only one hotel and one restaurant we opted to stay in Exuma.  From Exuma we took the famous swimming pigs tour which also included a sandbar, iguana island, swimming with sea turtles, AND swimming with sharks!  We took the tour with Coastline Adventures and they were excellent.

Earlier this year several of the pigs were found dead but not from what was rumored to be alcohol fed to them by tourists but sand ingestion and an overly dry January that depleted their water supply.

The tour departs from the northern pier and we were picked up in the center of Georgetown – Check the latest hotel prices.  Our boat took us through countless celebrity houses and private islands with our guide giving us the juiciest gossip. 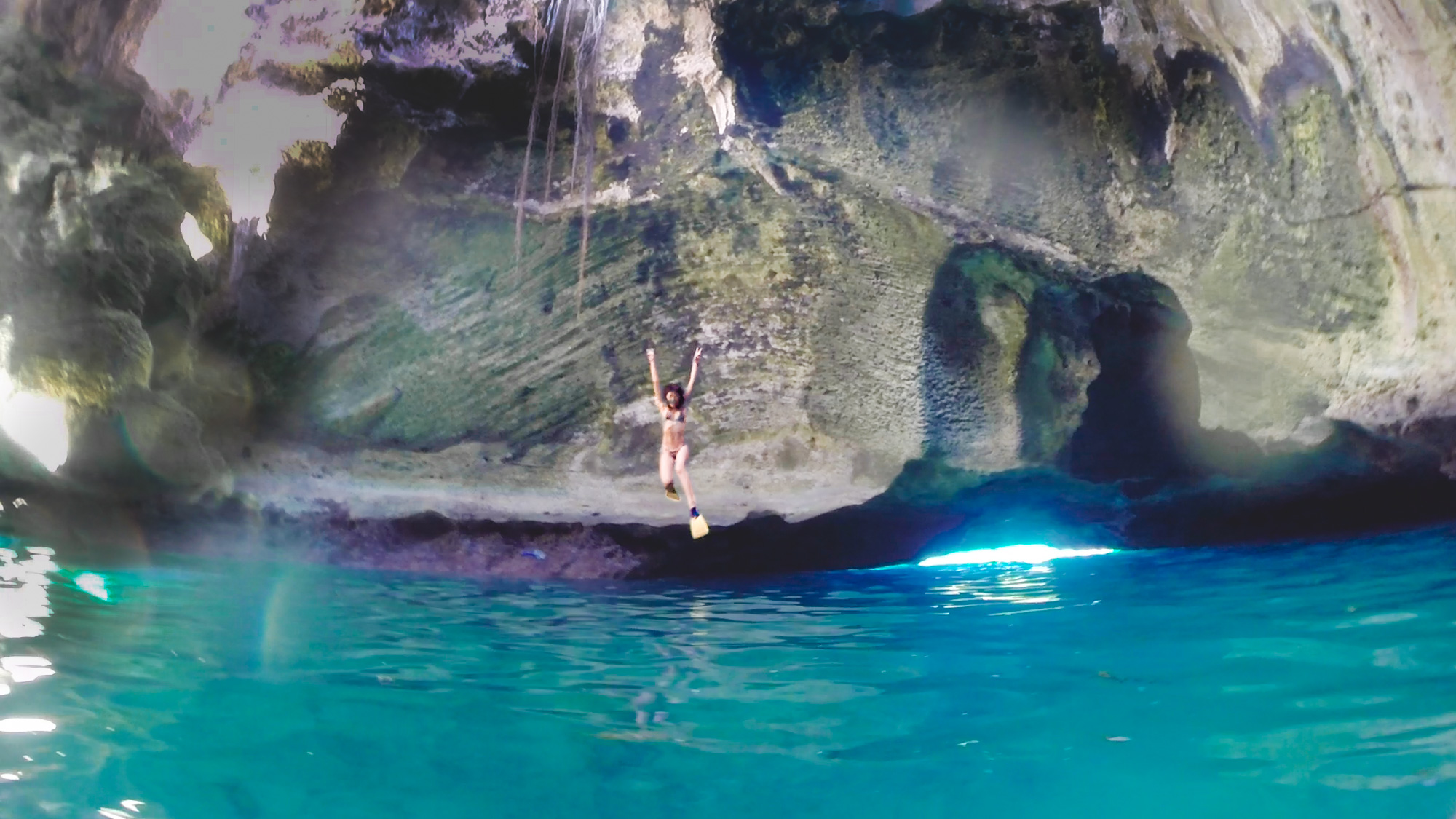 Our first actual stop was not pigs beach but Thunderball Grotto where they filmed the famous 1965 James Bond movie.  This grotto is fantastic and we got to snorkel through it.  There’s actually a hole on the top that you can jump into the grotto from but we were a bit short on time and I didn’t get to do it.

The Swimming Pigs in Exuma Bahamas (aka Pigs Beach) 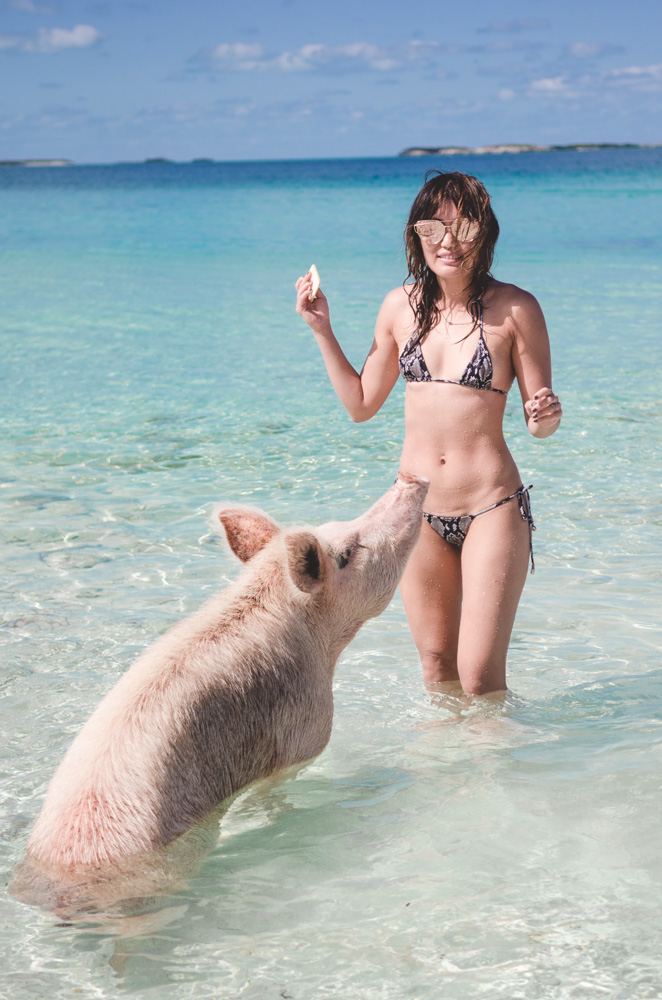 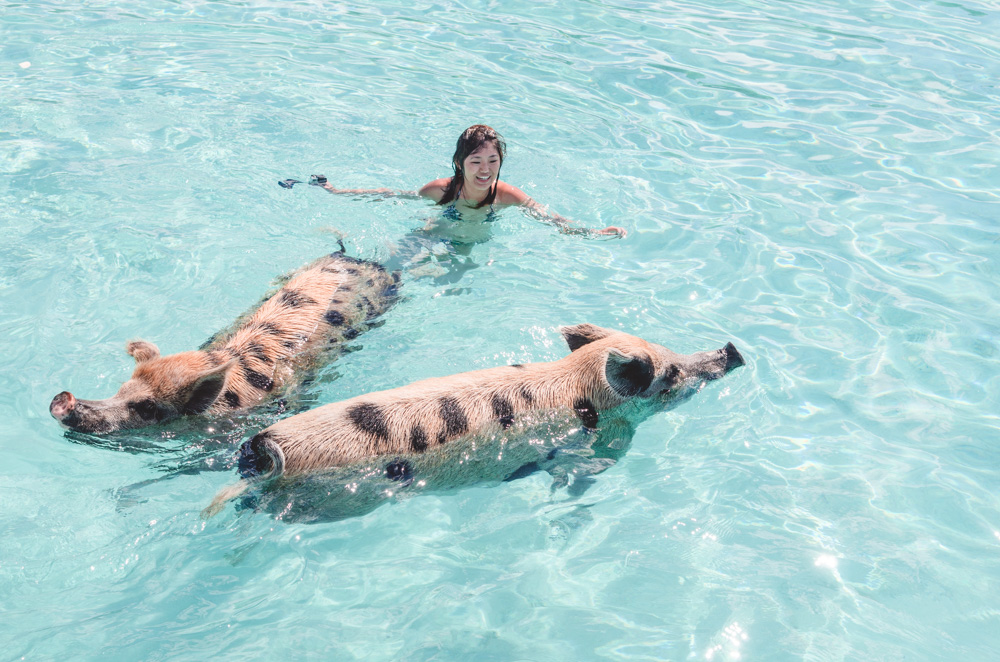 Next up was the main attraction this tour was named after, pigs beach!  The best part about this tour is we arrived just before other boats so for those Instagrammable moments we had the beach and pigs to ourselves!  It really is a sight to behold as the pigs swim out to the boat.  Eventually, we made it on land and I may have gently harassed a baby pig or two.  I’d recommend bringing some extra food like bread or fresh veggies to feed the pigs with they really are quite friendly.  But do not drop food in the sand or leave it behind on the sand. This may have been the cause death of some of the pigs, consumption of sand.  The conjecture is the pigs ate leftovers on the sand and also ate the sand with the food, so ended up with a ton of nondigestible sand in their bellies. 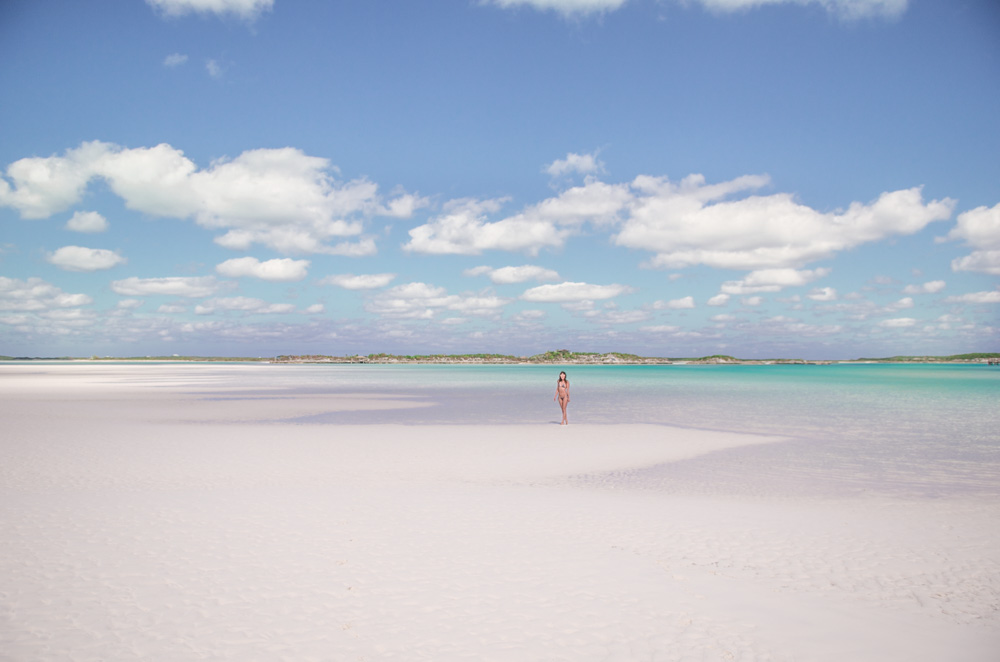 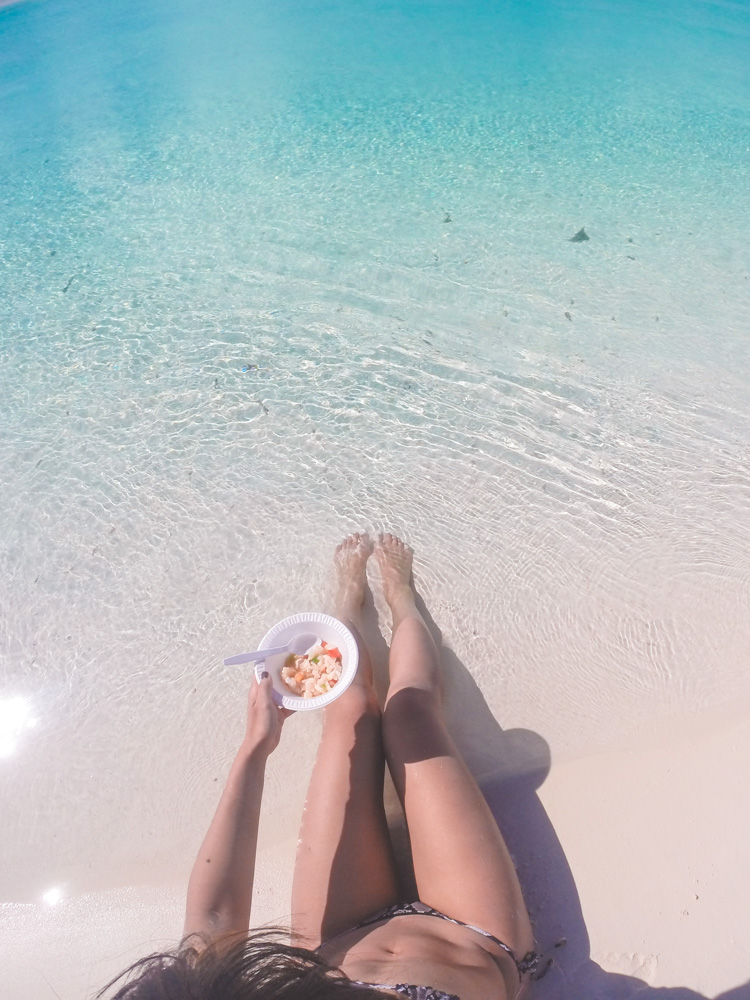 Next stop was an incredible sandbar where we ate fresh conch ceviche caught earlier on the boat ride.  The sandbar may be more incredible than swimming with pigs.  The water more clear than anything I’ve ever seen.

If you want to experience the crystal waters of the Bahamas and happen to be in Miami you’ll want to check out Bimini, Bahamas.  There are so many fun things to do in Bimini and it’s just a short ferry ride away from Miami!

Swimming with Sharks in the Bahamas 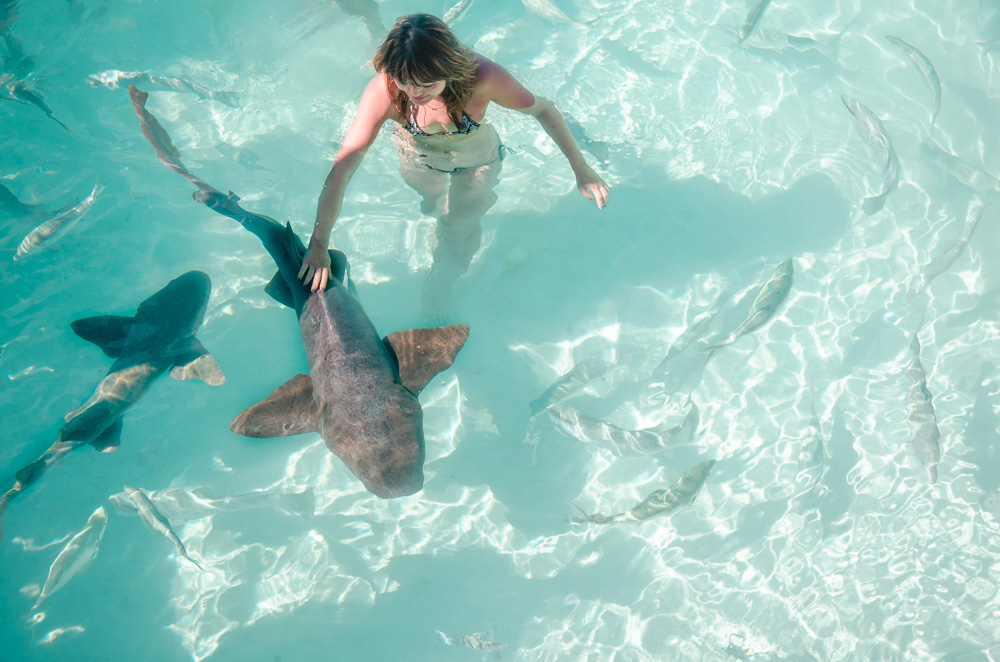 After the sandbar we checked off another bucket list item, swimming with sharks!  YES!!! I swam with sharks!  And no I didn’t get eaten. These are nurse sharks and harmless, just don’t do anything stupid.  They even let me pet them.  The sharks are located at Compass Cay, and you can totally get here yourself too if you stay at Staniel Cay.  I wish we could have stayed here just a tad bit longer because it was a truly magical experience.  If you want even more time with sharks try a one of a kind dive experience in the Bahamas, there’s so many dive sites!

Swimming Pigs in the Bahamas Tour | Chatting with Iguanas 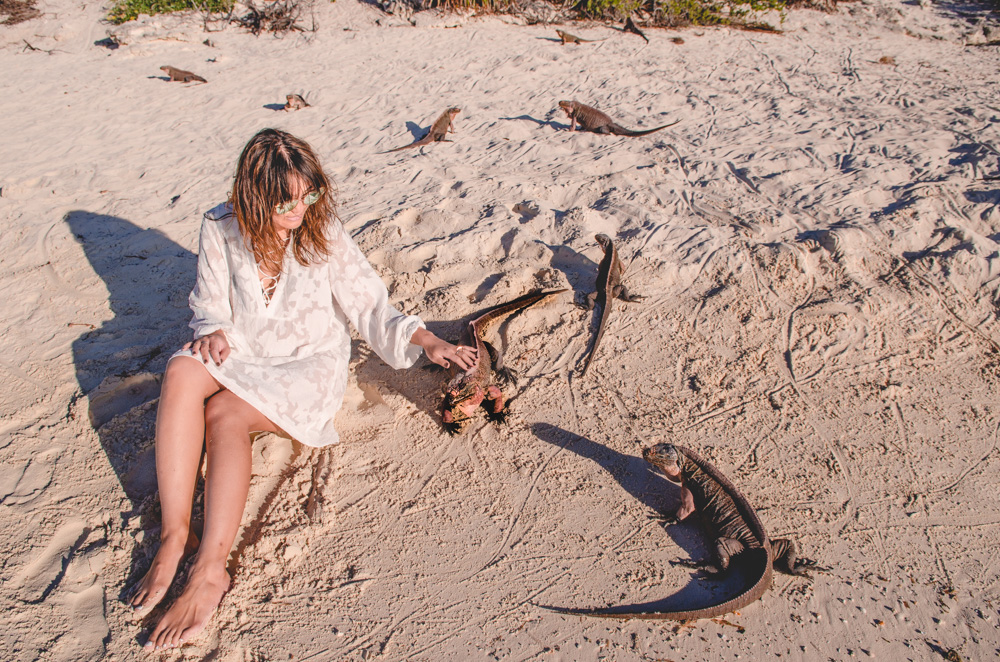 I feel like an infomercial with the “but there’s more,” but there is.  Coastline Adventures then took us to visit the iguanas.  These iguanas, like the pigs, live on a little island and we fed them bits of lettuce and pet them too.  Totally friendly and not dangerous unless you attempt to do anything stupid. 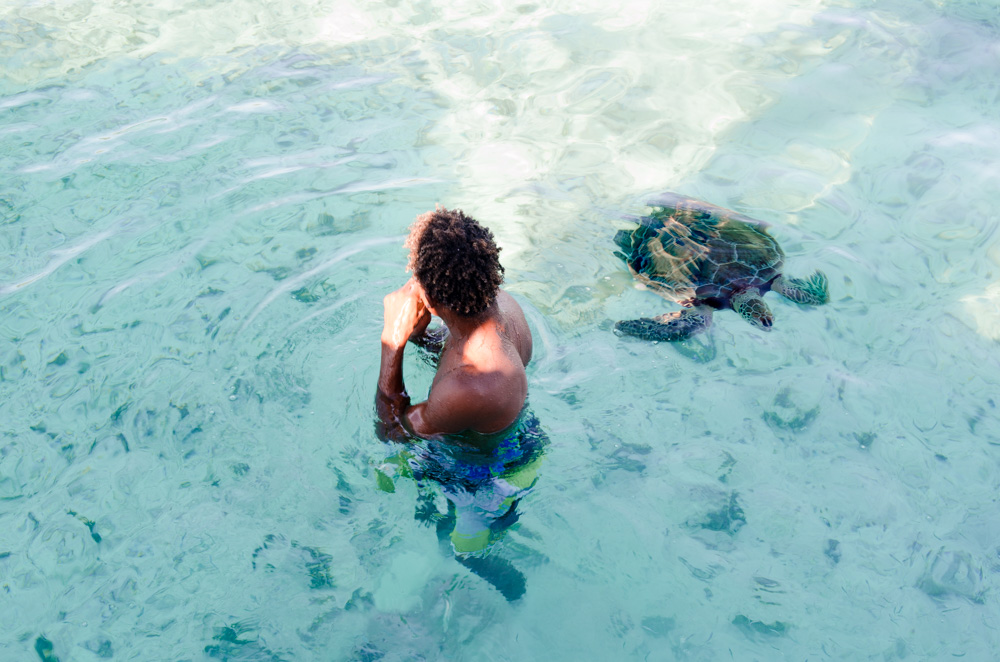 And bonus, before we headed back we made a quick stop to visit the turtle whisperer.  This little guy literally speaks turtle and gets them to come out to swim with you, another memorable experience.

So the truth about the swimming with pigs tour with Coastline Adventures?  It’s a must do with an excellent tour company.  They provided all the drinks on board and we stopped off at a cute little lunch place (price not included, but simply delicious) on an island with goats.  If you are an animal and nature lover this tour is a must do from Exuma.  The boat captain and assistant were both amazing and told the best stories about the island and all the sites we saw.

Want to experience the crystal clear water of the Bahamas in one day?  If you happend to be in Miami, Bimini Bahamas has some fun things to do and is just a ferry ride away.

And no this was not sponsored in any way I simply loved the tour because it was an amazing experience with a family run company providing a perfect trip.  A note about pricing, the tour we took included swimming with sharks and that is extra.  You can get the tour without the stop at the sharks and it’s a bit cheaper, but I would spend the extra and include the stop at the sharks!

For unedited footage our experience swimming with pigs check out the Sea of Blush Facebook Page.

Sign up here to be the first to know about everything Sea of Blush.

Get ready for AWESOME!

You have Successfully Subscribed!