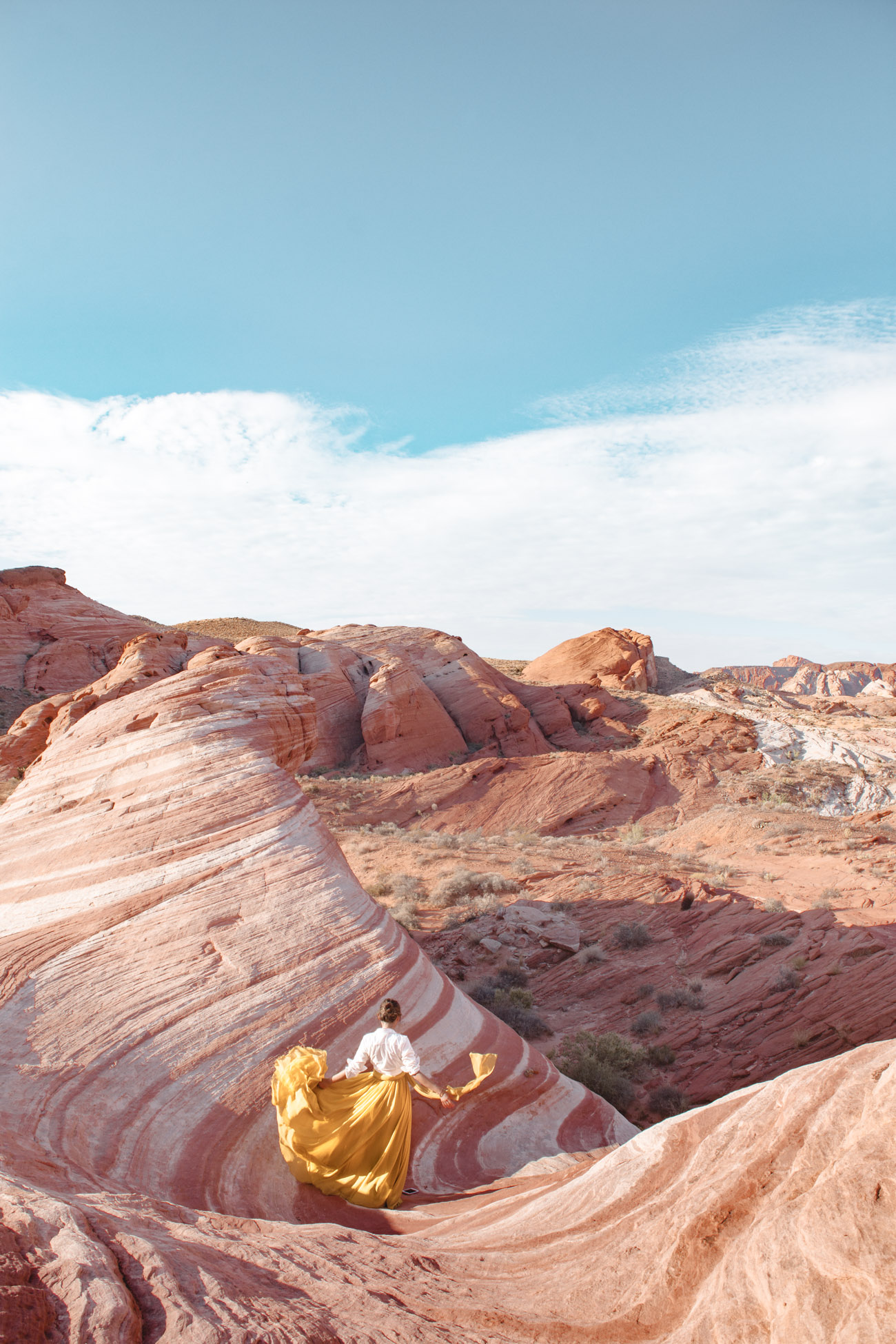 This hike leads you to a bowl-shaped formation with wavy lines of red and orange, hence the name Fire Wave Trail.

Though Fire Wave Trail is the most famous, it is not the only trail in Valley of Fire.  During my day trip to the Valley of Fire from Las Vegas, I managed to hike about 3 trails.

Where is Valley of Fire State Park 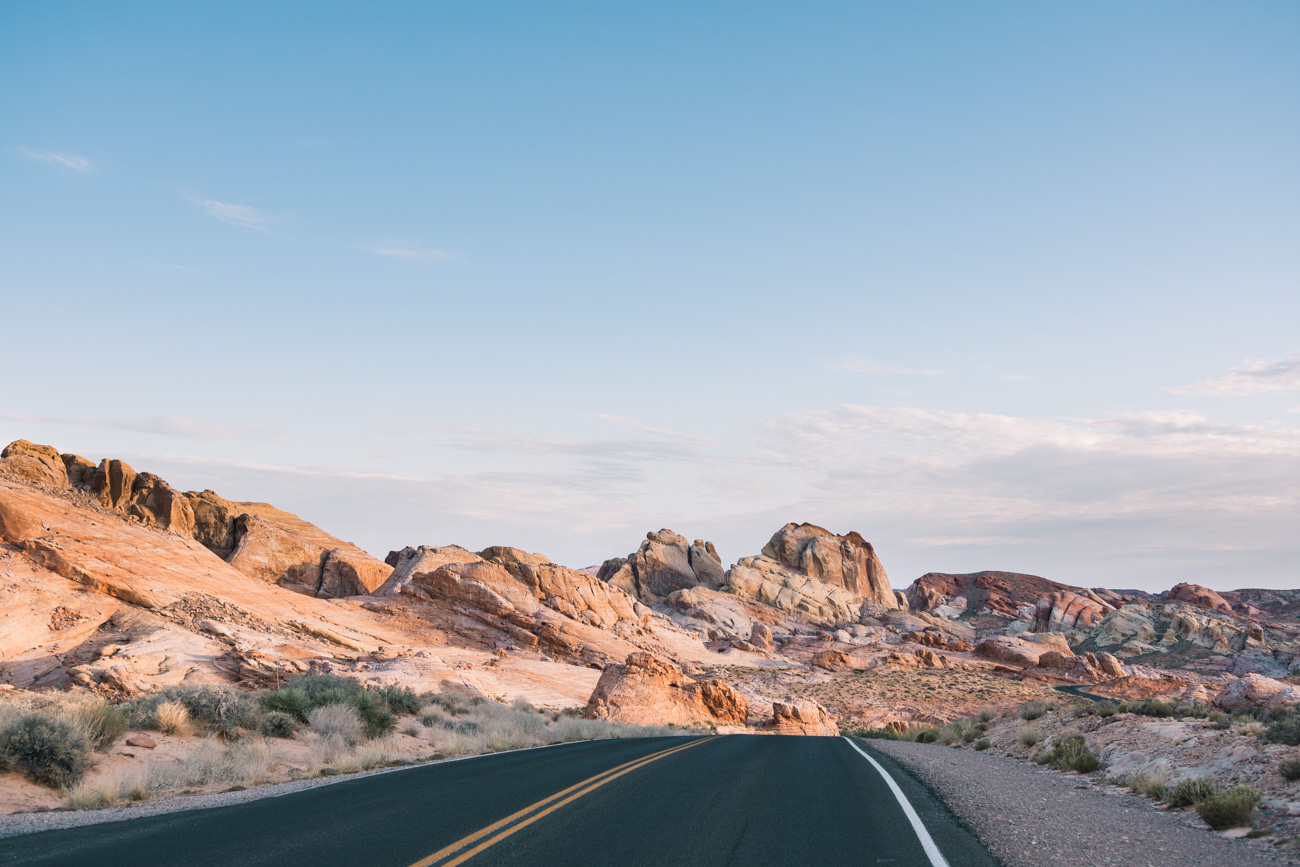 The easiest way to get to Valley of Fire State Park is to rent a car and drive there yourself.

Driving yourself gives you the most flexibility and a chance to see more of the park.  There’s plenty of car rental agencies in Las Vegas that can rent you a car for $40 a day.

I would, however, spend the extra and go with a name brand.  I rented in Las Vegas before from an off-brand.  Though the car was fine, the pickup process took over an hour!

Another option to see the Valley of Fire is to take a guided tour.  The advantage of a guided tour is you don’t have to do any driving or picking up supplies like water.

You will also likely have a built-in photographer with the tour guide – CHECK TOUR PRICES.

This is a great option especially if you are not comfortable driving.

Valley of Fire does have a $10 entrance fee.  I was trying to catch the sunrise here, so I got to the entrance super early and there was no one there.

The park has a little envelope and drop box where you can leave your entrance fee and drop it in a box. 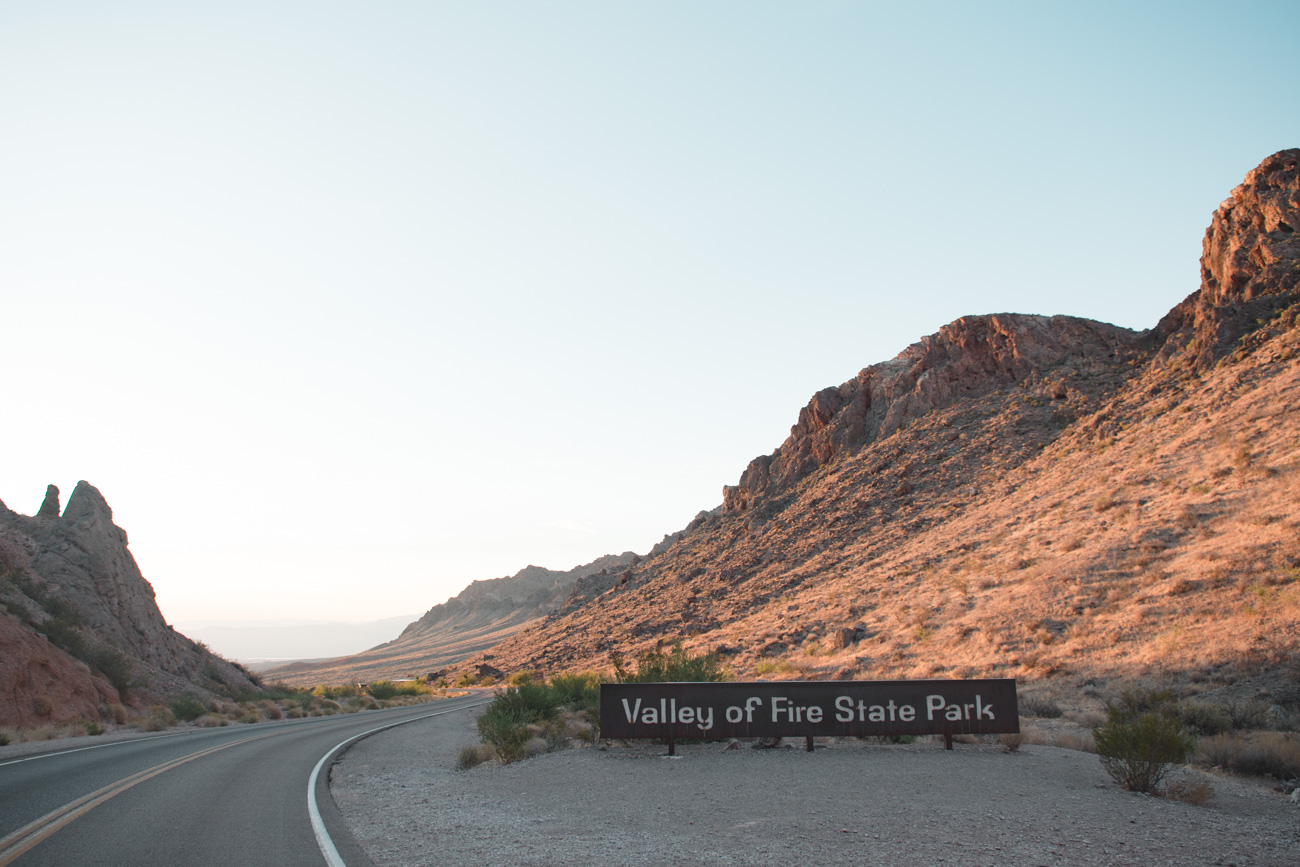 What to Bring for Your Day Trip to Valley of Fire

Water is probably the most important item on your list if you are looking to hike any of the trails in Valley of Fire during summer.

It is hot and there is no water after you enter the park and pass the visitor center. Bring double what you think you will need.

I wish at the time I had brought this water bottle that keeps your water cold – CHECK PRICES.

Given the opportunity to do the hike all over again I would fill up that bottle with water and leave it in the car, then take a 24-ounce plastic bottle of water with me.

The sun is super strong at Valley of Fire and there is hardly any shade.  So bring adequate sun protection.

I actually wore a long-sleeved UV shirt that I got from Uniqlo ages ago that prevented any sunburn, a similar one here. 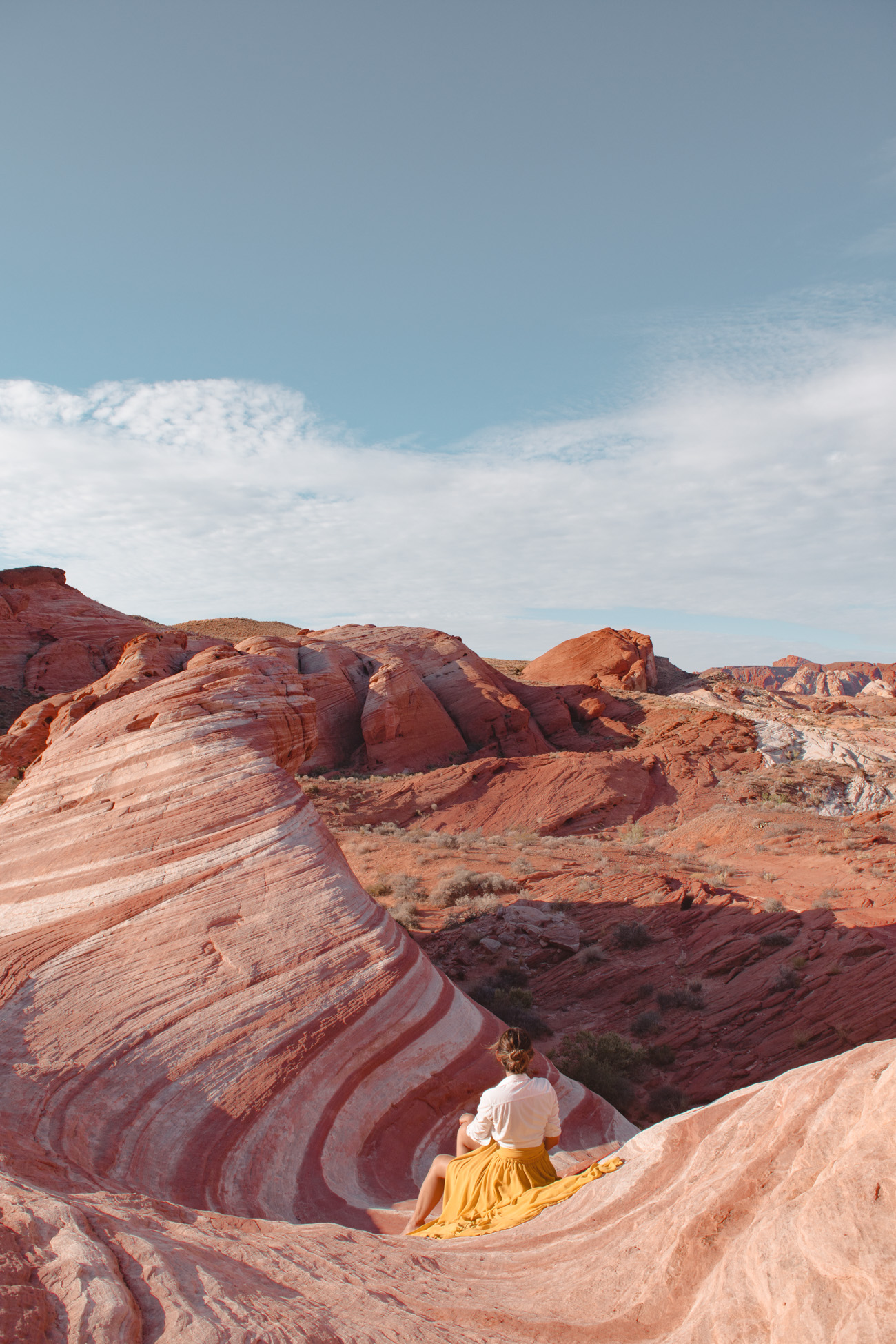 Hiking Valley of Fire in the Summer

I knew it was going to be extremely hot when I tried to hike Fire Wave in July.  There was a warning sign at the visitor center telling people NOT to enter the park. 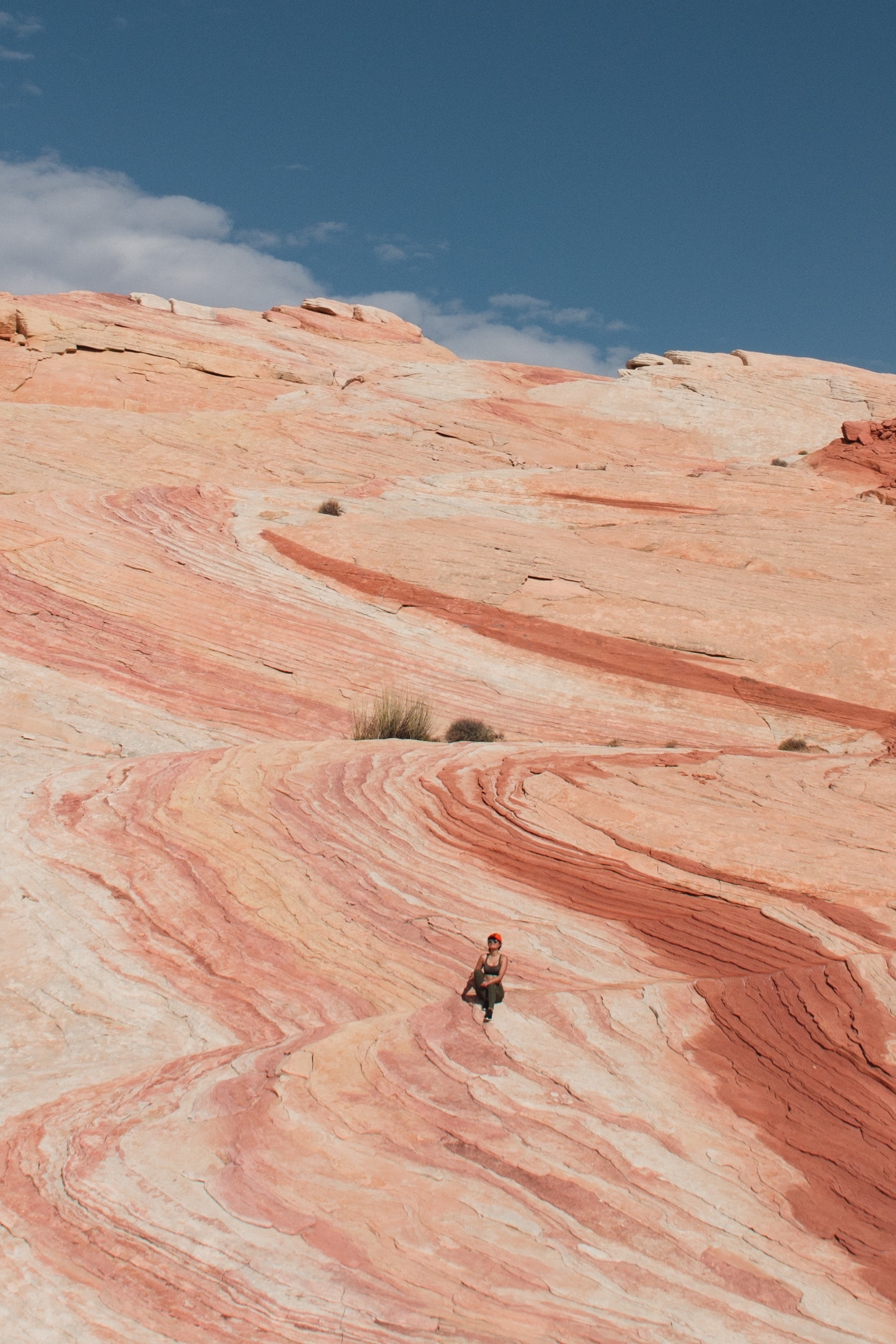 And that you were entering at your own risk and could die.

My advice is to prepare yourself well for this hike before going in the summer.

Packing four 24 ounce bottles of water, I thought it was enough because I had intended to hike Fire Wave Trail only.

But I ended up hiking more trails, so for that part, I wish I had brought more water with me.

Second bring clothing to protect you from the sun, not just sunscreen.  You will sweat more than you ever have before which means your sunscreen won’t last as long.

The best way to not get sunburn is to cover yourself. I wore long leggings for working out and also a UV shirt – CHECK PRICES.

The sun is super bright here so definitely wear sunglasses and a hat!

Get to Valley of Fire Early in the Morning 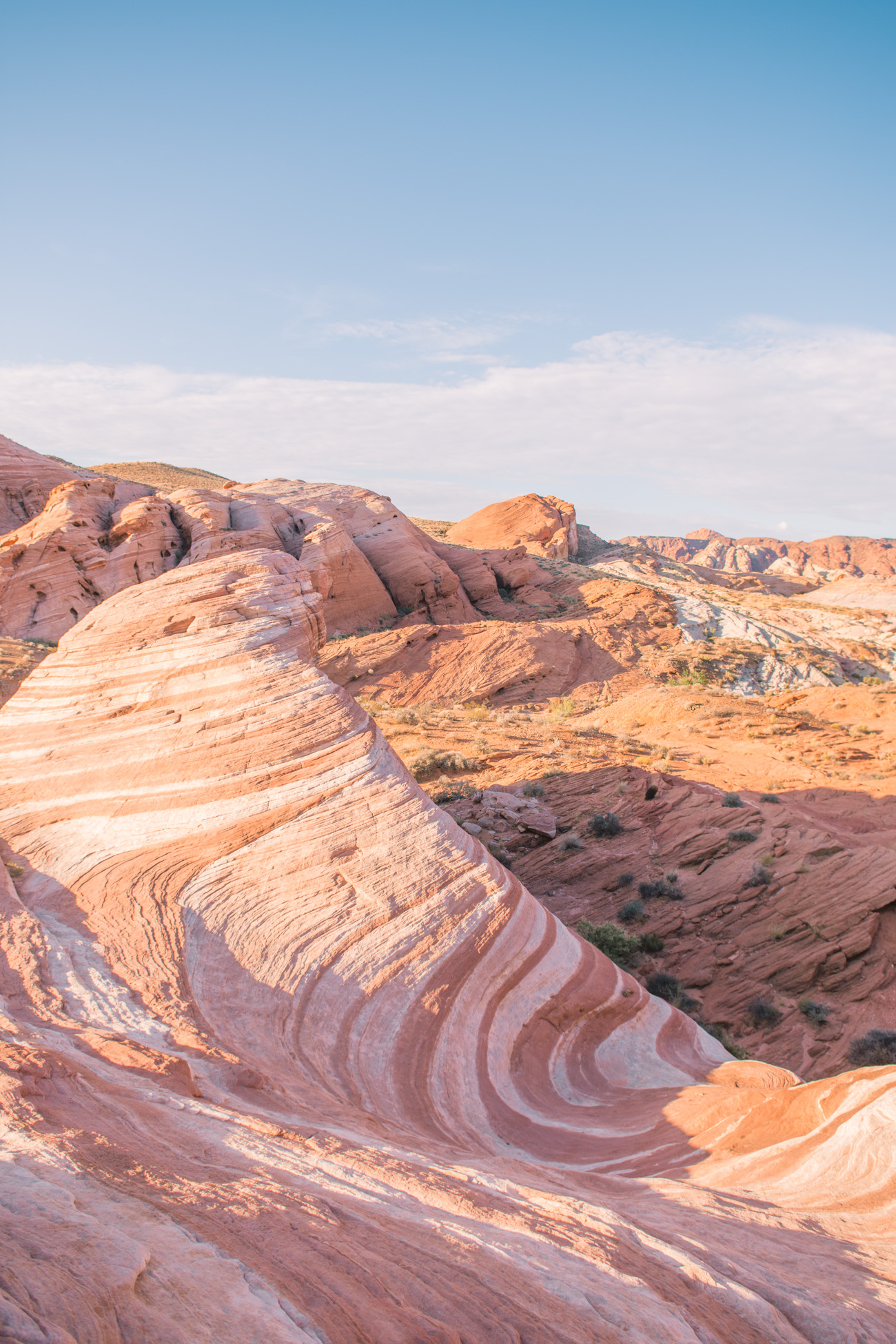 I wanted to be at Fire Wave for sunrise, but I left Las Vegas a bit later than planned and missed the sunrise.

After finished the Fire Wave Trail it was super hot out!

Fourth, listen to your body!  If you start feeling weak or dizzy turn back, don’t keep going.

Especially if you are hiking alone. I was completely fine after hiking 3 trails, but by then I had run out of water in the car.

There was one more viewpoint on my to-see list, but I decided not to do it because I had no more water and I was kind of beat.

I regret not doing that last hike because it was super short to get to the viewpoint, but I’m glad I was smart enough to listen to my body.

Download a Map of Valley of Fire from Google

Fifth, download the Google Map of the entire area when you are on wifi.

Before leaving Las Vegas I downloaded the map of the entire Valley of Fire park area onto my phone.  Download the map when you are on wifi because it may not download over cellular.

As soon as I turned off 15 North I basically had no reception.  Though the trails are well marked it’s better to be safe than sorry.

Even with no reception, your GPS will still work with your downloaded map, so you can see exactly where you are in Google Maps.

As I was hiking back from Fire Wave Trail I actually was going in the wrong direction.  The scenery looked a bit off from when I arrived, so I checked my map and sure enough, I had headed the wrong way.

So downloading that map saved me! Make sure your phone is fully charged before you go and bring a battery pack just in case – CHECK PRICES.

Fire Wave Trail is not much of a hike, but more of an easy walk and it is well marked. 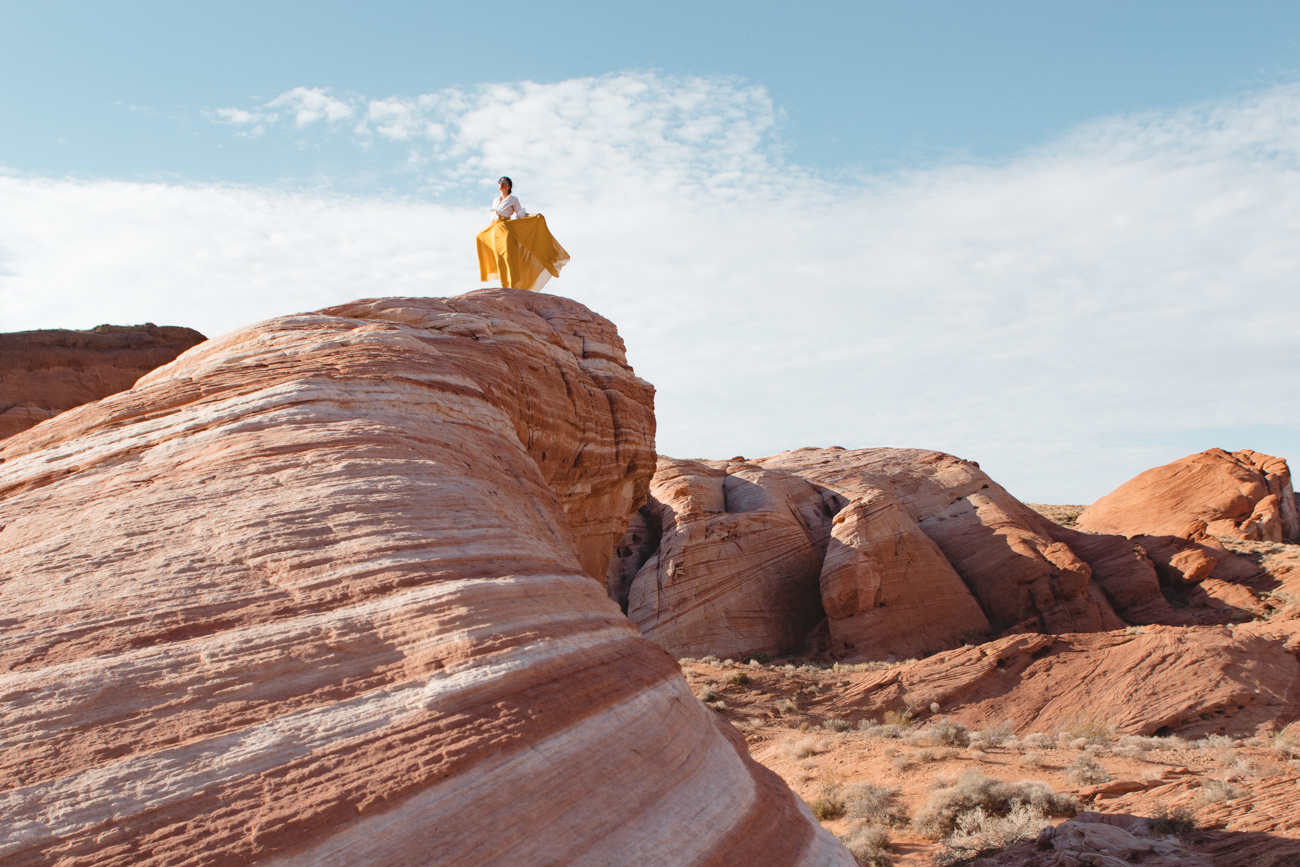 The most challenging part of this hike is the heat. It’s only 1.5 miles long and easy to walk.  I did it carrying a 24 ounce bottle of water, tripod, and my DSLR with no problems.

As for footwear, I wore my trusty Nike Roshe One’s. 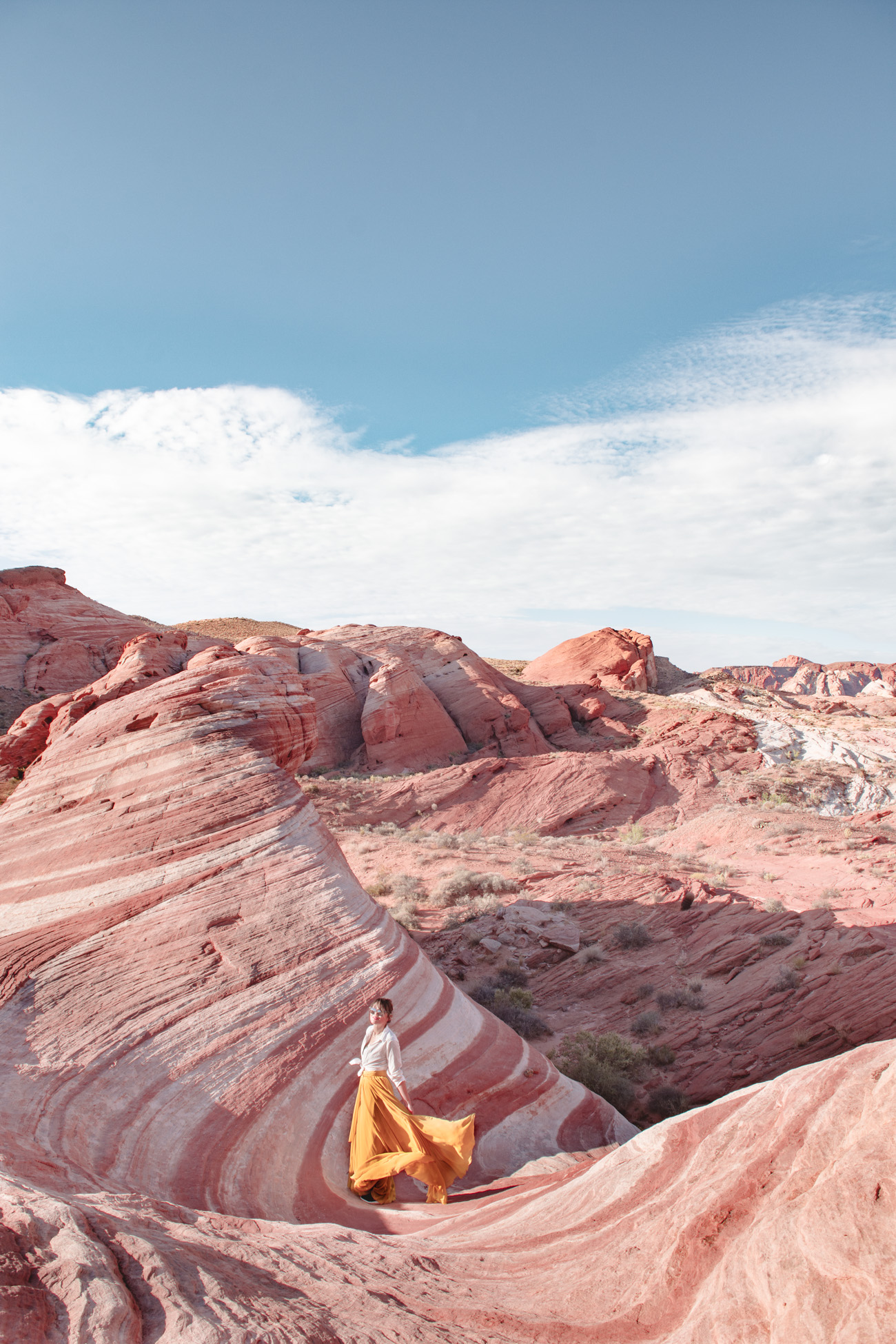 When I arrived at the stripes of Fire Wave Trail there was only one other set of photographers there.  Having chatted them up they told me that this hike is really popular and by about 11am there are a ton of people here. 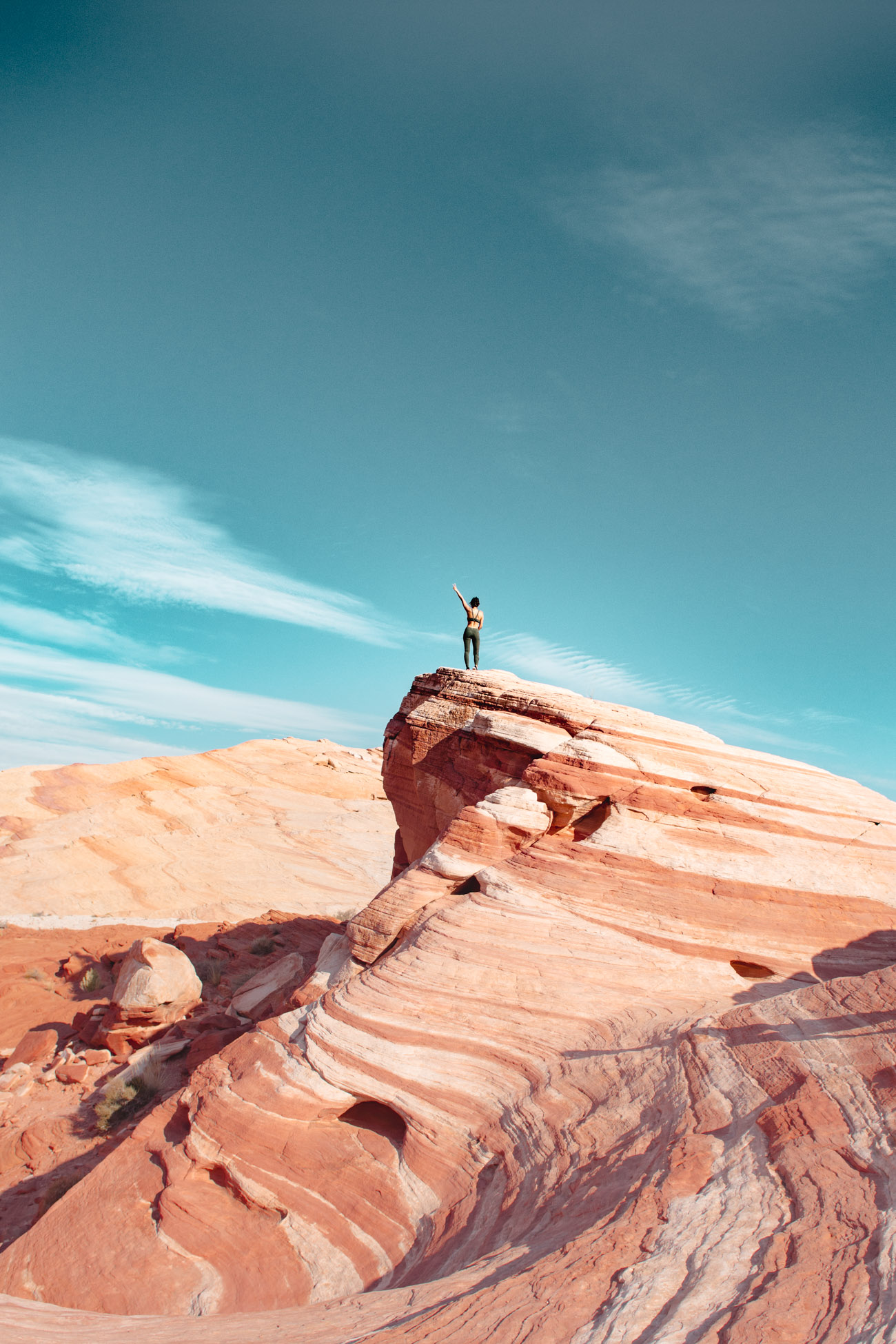 I didn’t make it to Fire Wave by sunrise but I still got there pretty early so there was hardly anyone else there the entire time I was.  If you want to avoid the crowds definitely get to Fire Wave early! 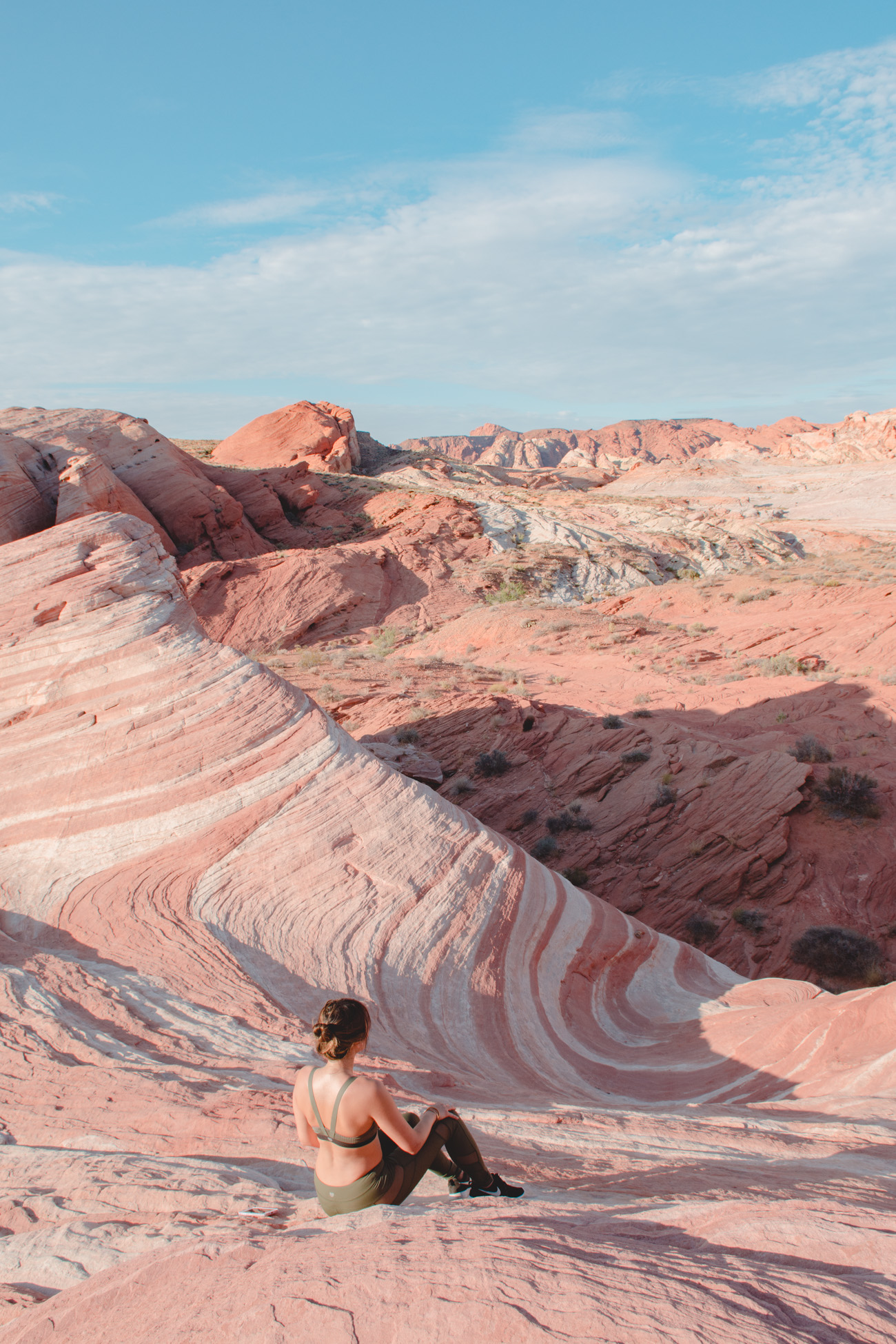 Also, there’s more than just the stripes that cover the bowl-shaped indentation at Fire Wave.  The surrounding area is also stunning! Fire Wave is definitely a must-do if you are visiting Las Vegas.

The White Domes Trail at Valley of Fire

After I finished at Fire Wave, I drove further into the park and hiked part of White Domes Trail. 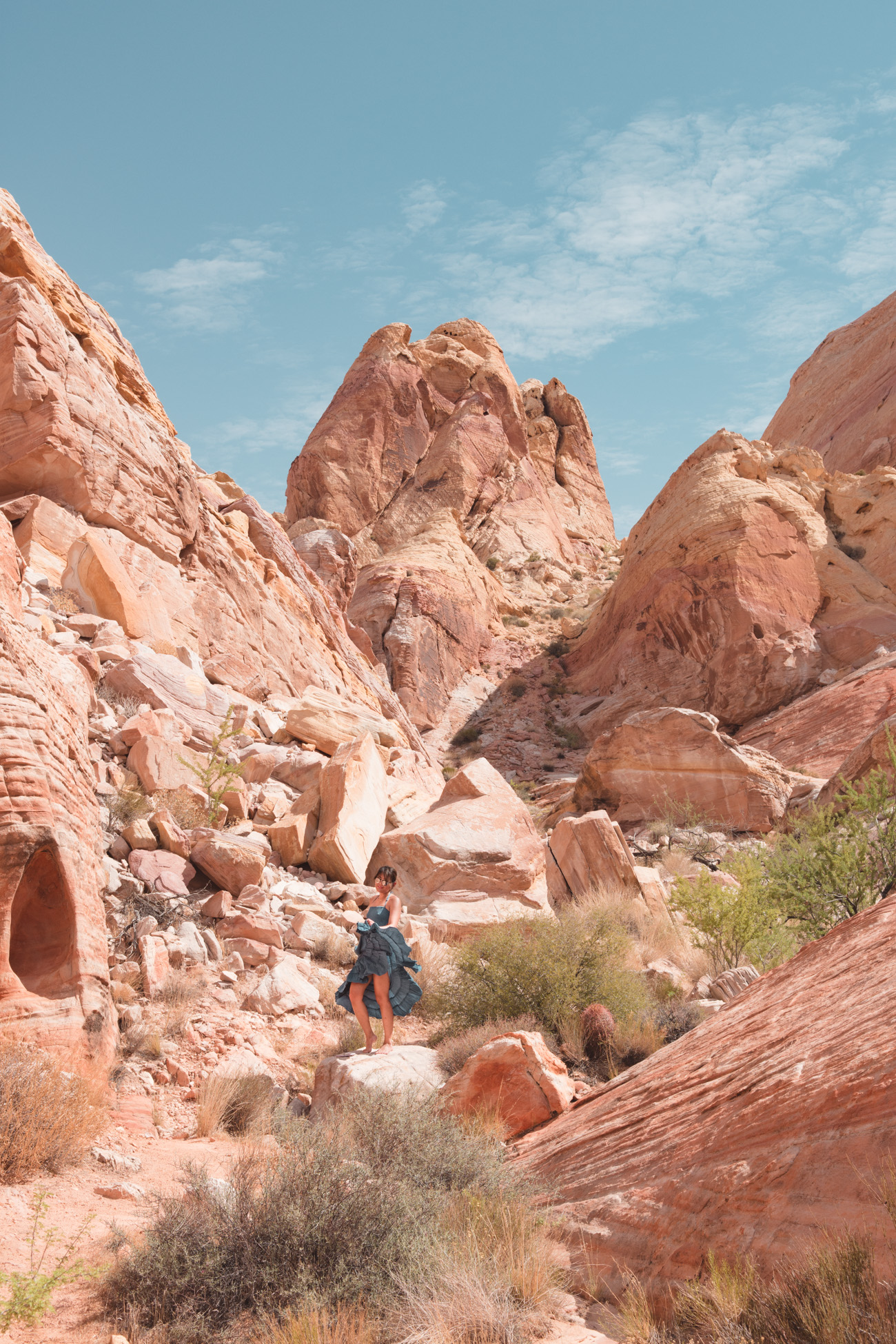 This trail is much more challenging with a steep incline into a valley. What’s really cool about this trail is that not far from the trailhead is a slot canyon similar to the ones you see in Arizona.  That’s one of the reasons I wanted to hike White Domes Trail. 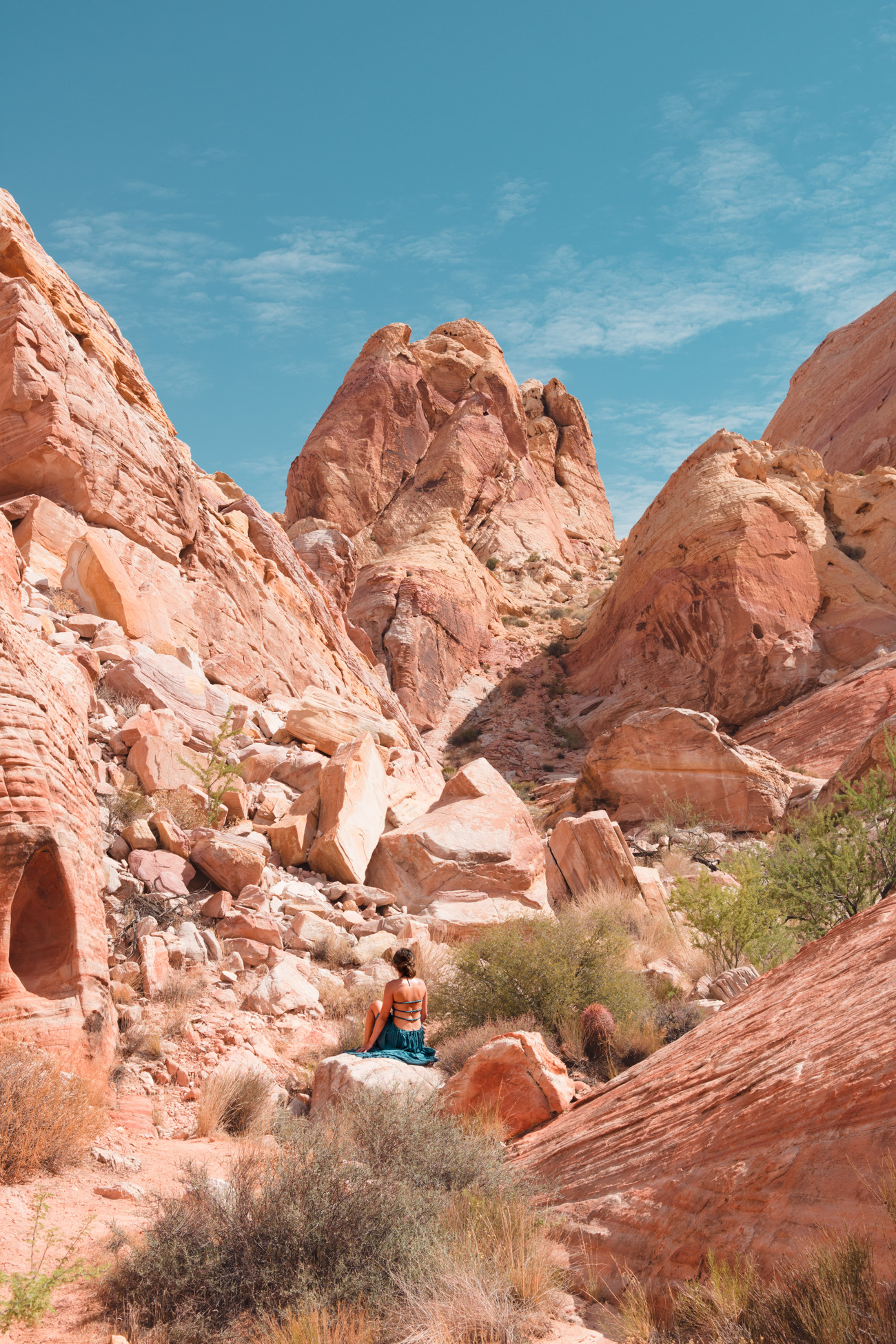 Hiking to just past the slot canyon I had to turn around because I drank all the water I carried with me. 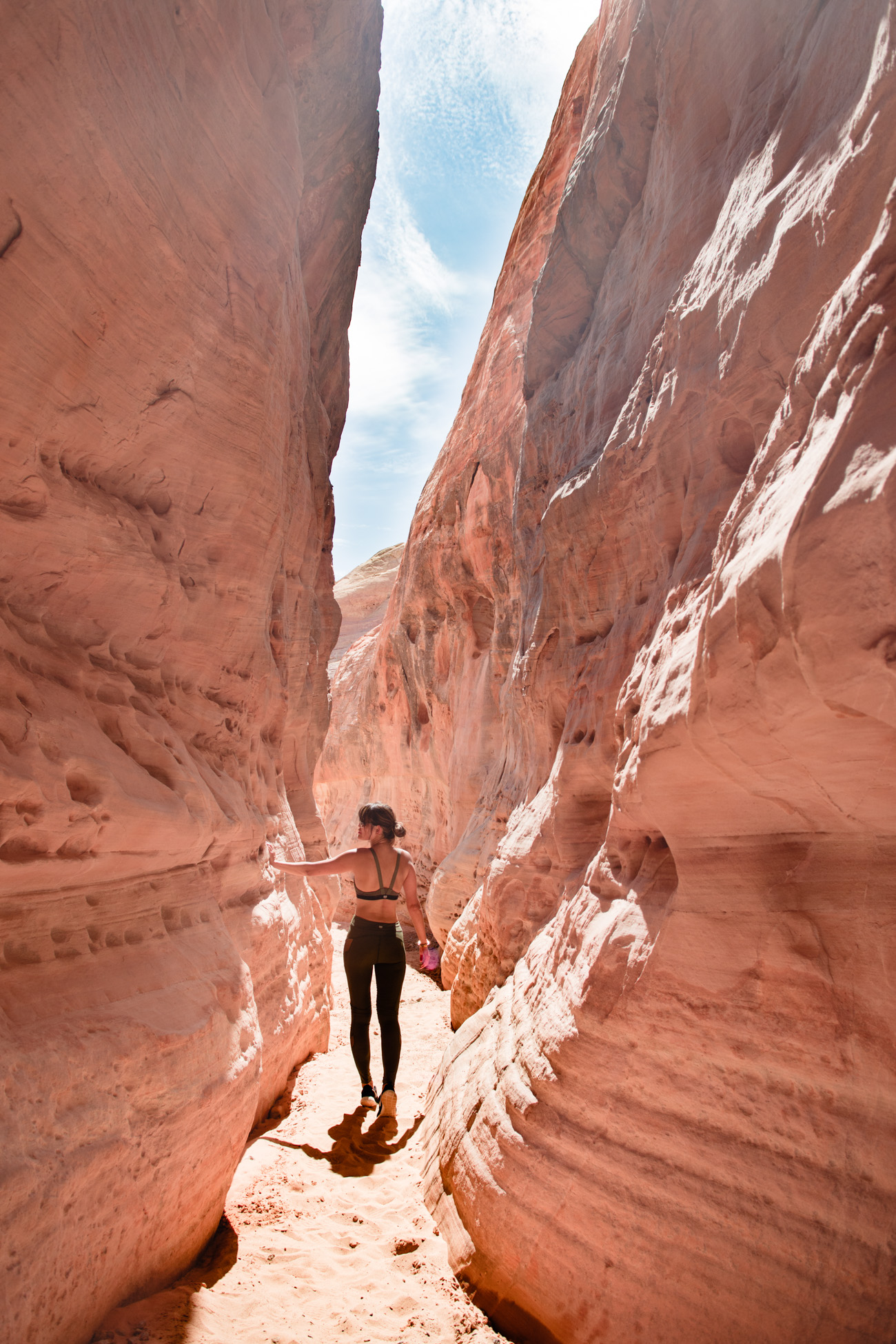 It was 11 a.m. by the time I got out of the White Domes Trail and so much hotter than when I had first arrived at the park. 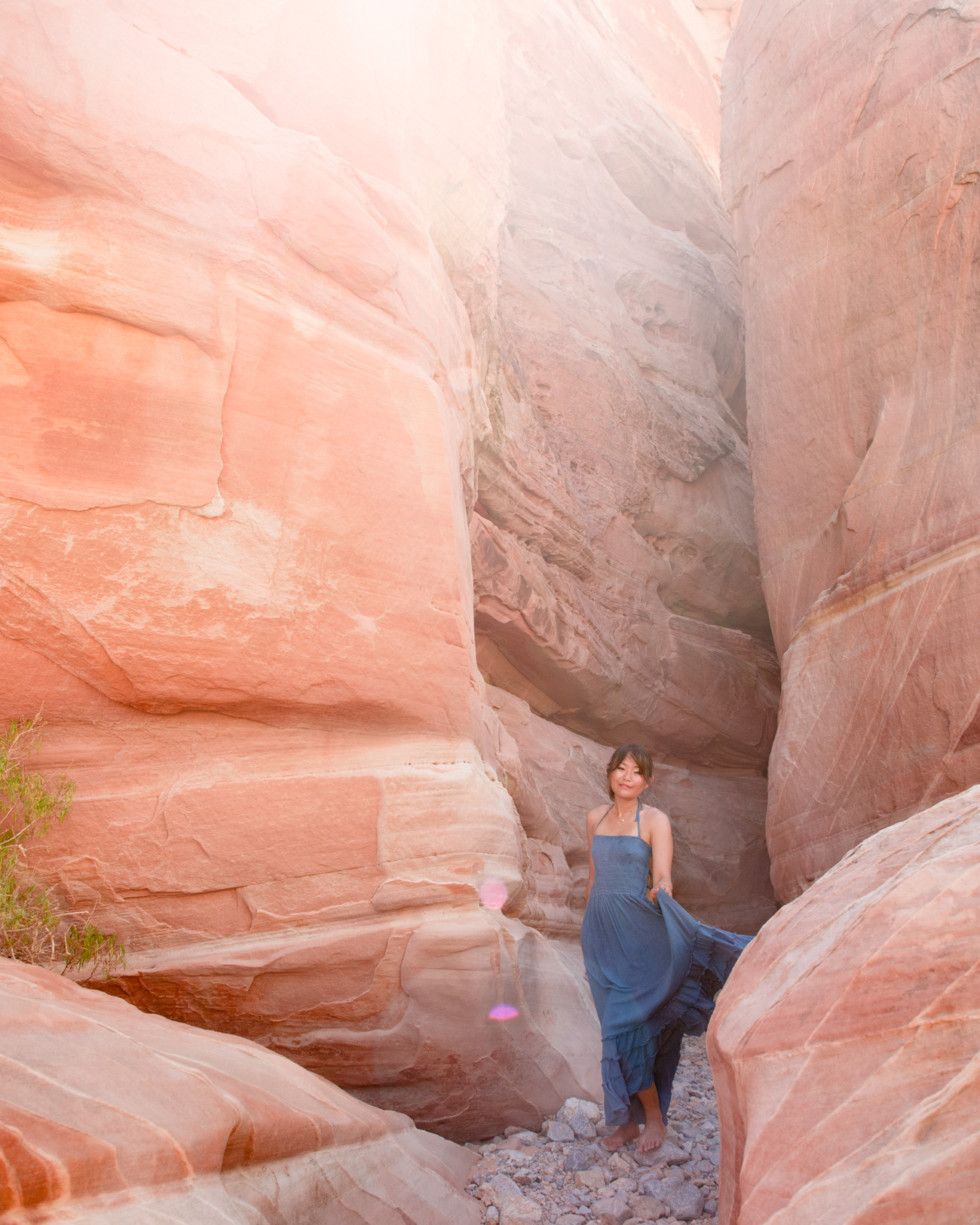 My blue dress is available here.

The last hike I did was Pastel Pink Canyon. 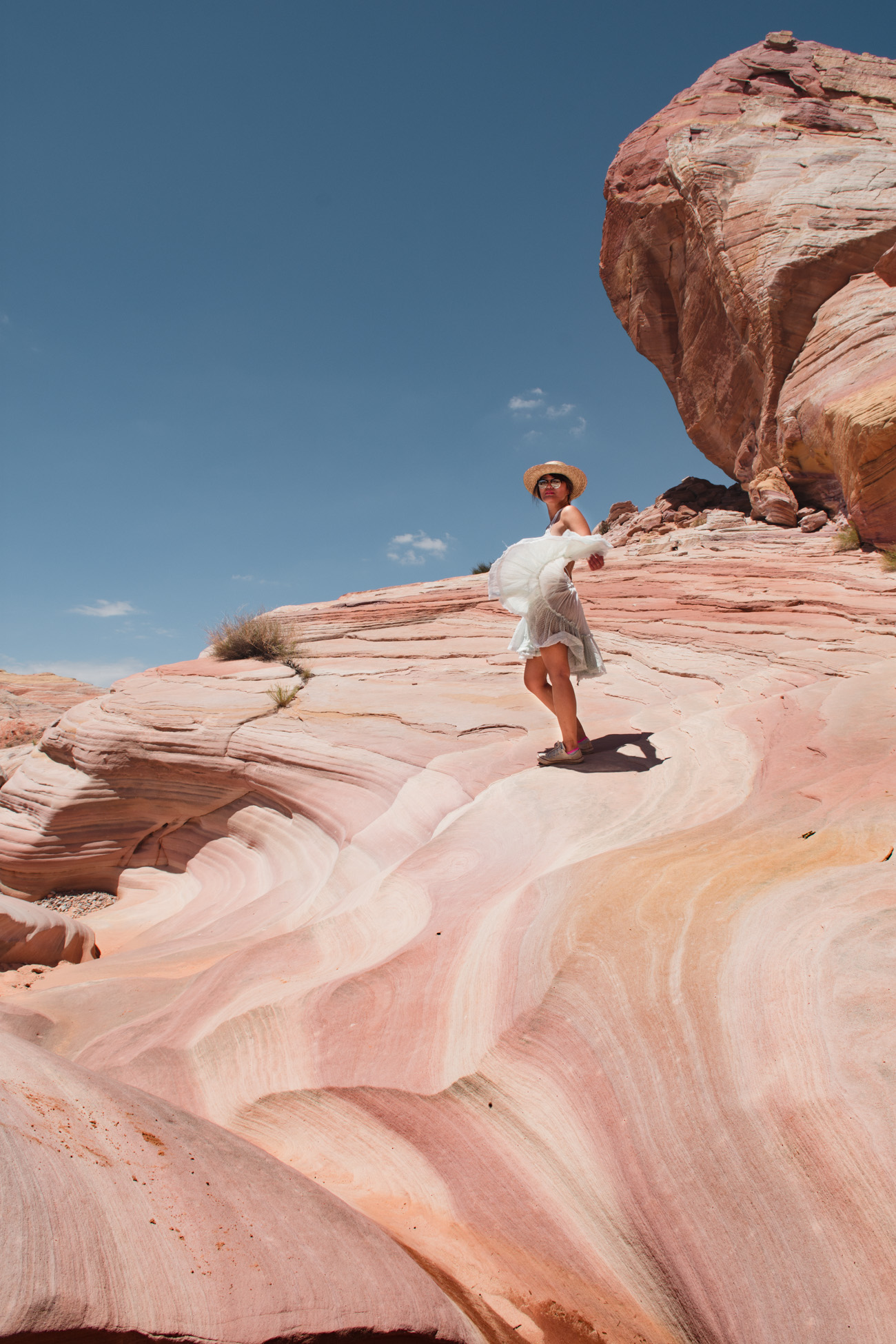 This little canyon is just off the main road and there’s no official sign or parking.  You can park across the street from the hike where there’s a bit more of a shoulder. 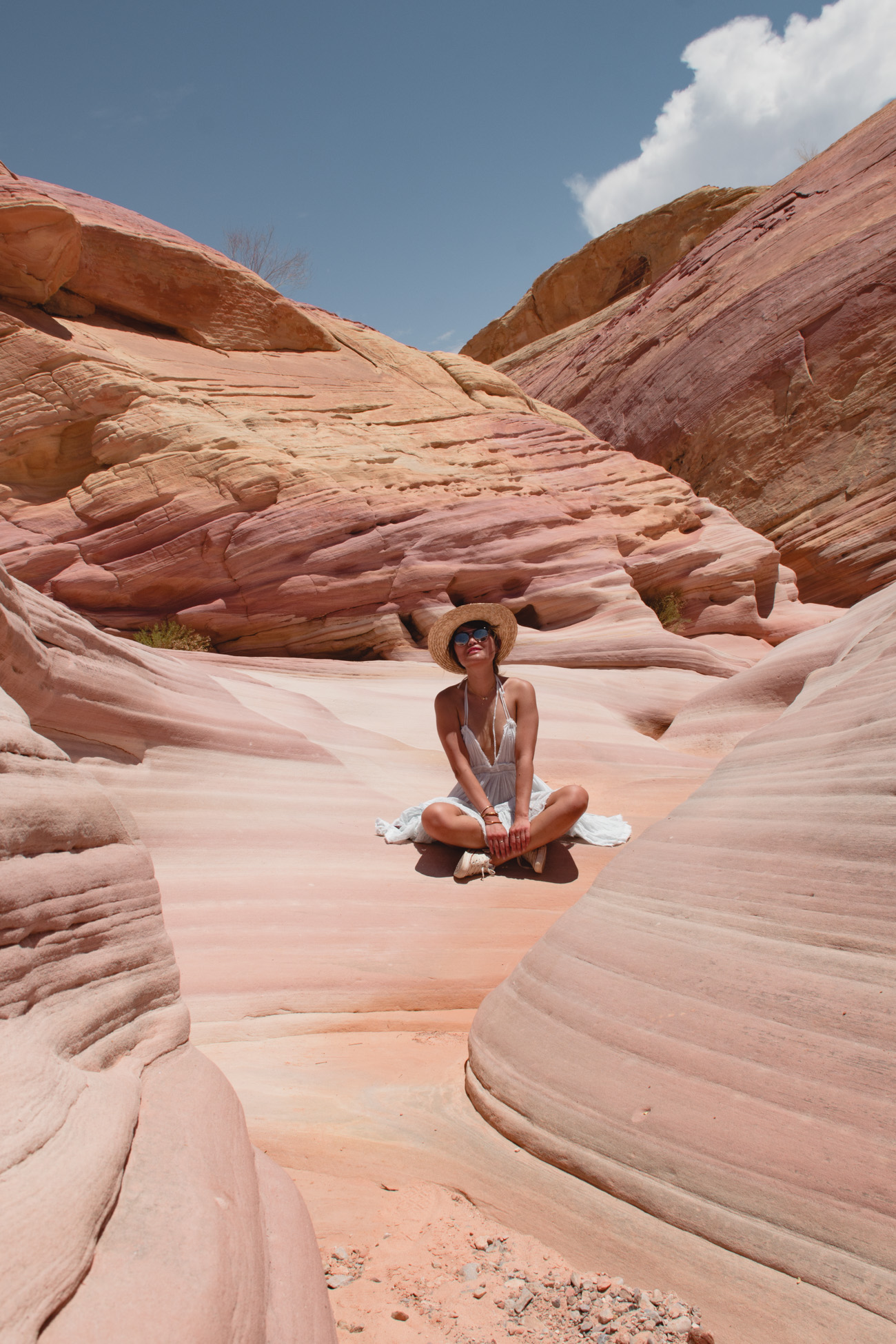 Pastel Pink Canyon was more of a little walk than a hike, but it leads to some really pretty PINK canyon scenery! 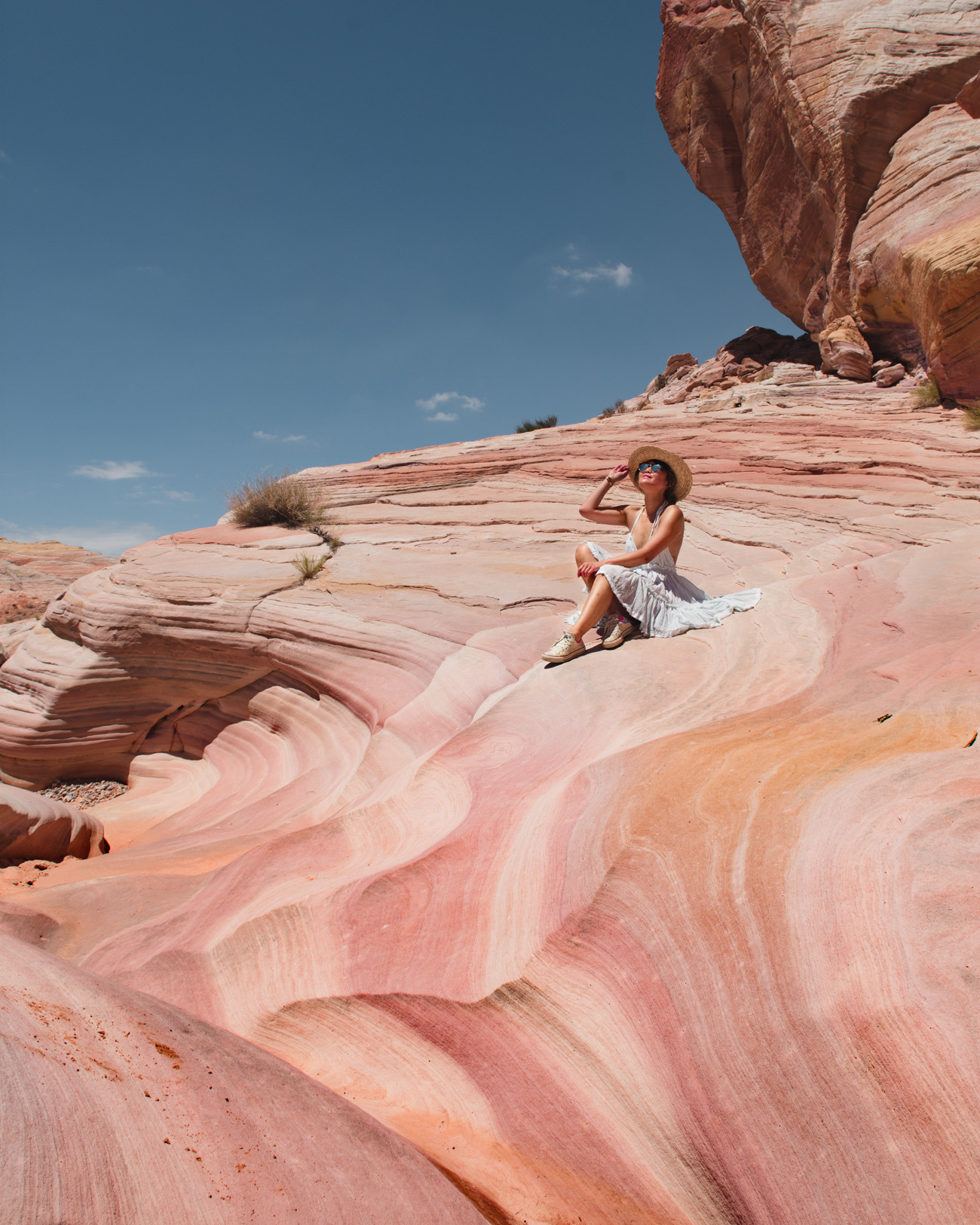 I really wanted to do Rainbow Vista after I did Pastel Pink Canyon, but honestly, I was too tired.

After parking at Rainbow Vista, I was ready to scale some rocks to get to the viewpoint but stopped myself.

With only a bit of water left and quite tired I just couldn’t do it.  If you get the chance to get on top of the rocks, Rainbow Vista offers incredible views of the valley!

Before leaving Valley of Fire, I did stop at a few viewpoints that didn’t require any hiking.  And on the way out and parking on the side of the road, I took a beautiful shot of the valley. 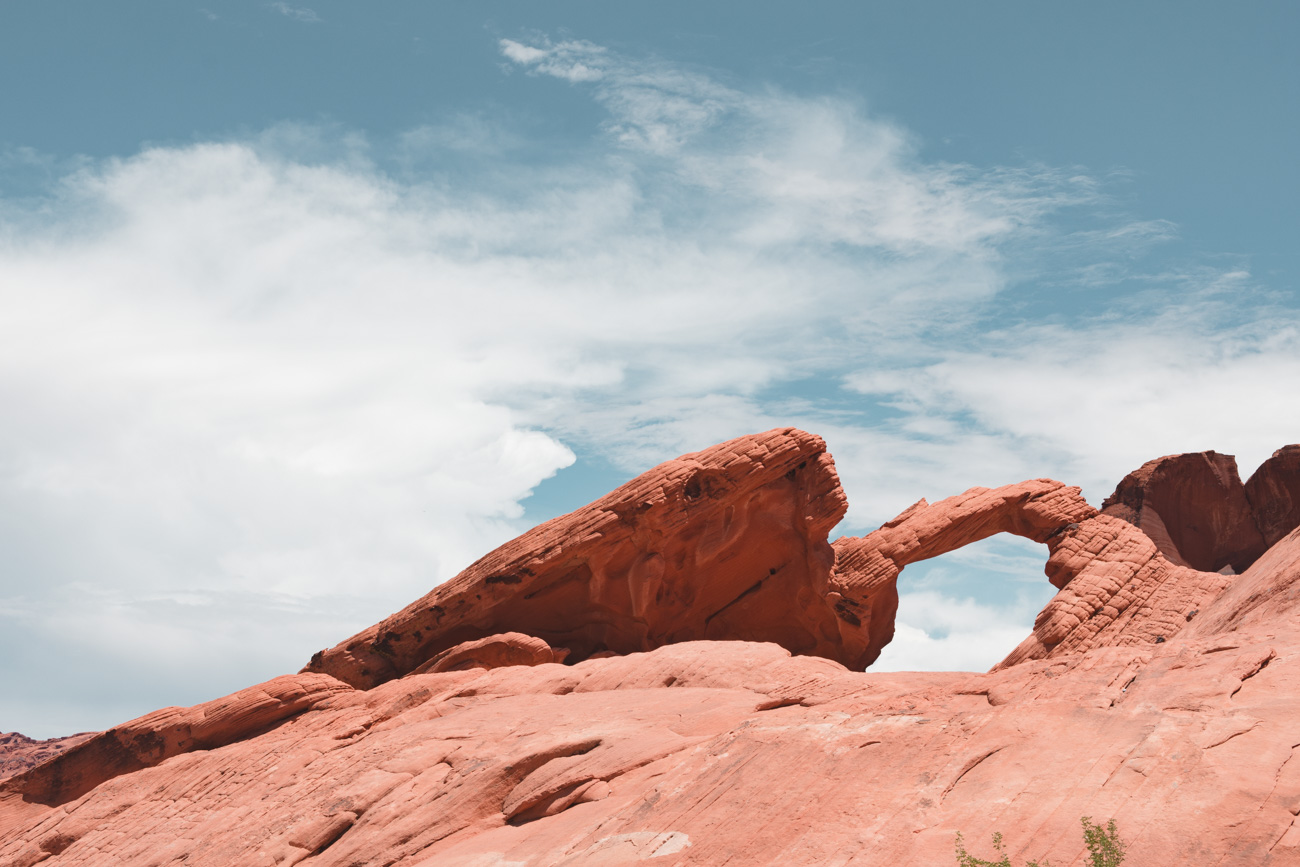 I wish I had more time to spend here because it was so beautiful!

Coming here in spring, fall or winter might be a better option because, without the heat, it would have definitely been easier!

Still, going on a day trip to Valley of Fire State Park was one of the highlights of my last trip to Las Vegas!

If you want to experience some desert magic but don’t have the time to go to Valley of Fire try hiking Red Rock Canyon instead!  It’s much closer to the strip! 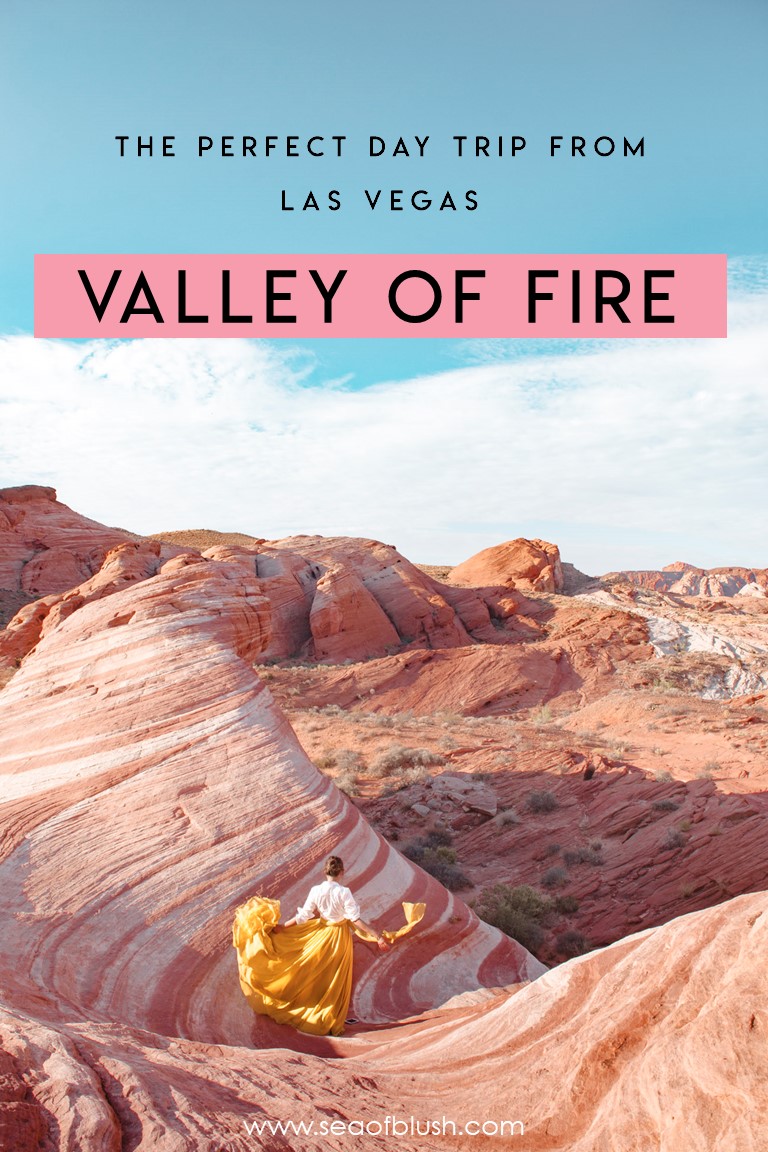 Surrounded by gold wearing blue! I still think i

Going for more instagram casual vibes! Is it me o

All about puff sleeve cottagecore dresses! This i

I may have trained my brother so well that he’s

Having a moment in gold ✨✨✨details linked in

Had so much trouble focusing because my face detec